Last weekend, I made my way up to North Hollywood for the Vegan Street Fair and it was an amazing event! There were what seemed like hundreds of booths and food trucks, with some of the best vegan food California has to offer. I recognized a few old favorites, like Suncafe and By Chloe, but got to taste some new places too!

Not only was it a gorgeous, sunny day, but there were over 20,000 attendees there enjoying the sunshine and vegan food with us. This did lead to some pretty epic lines, but it was all worth it in the end.

What really struck me was the diversity of food they had to offer. I saw everything from vegan Dippin Dots, to vegan bulgogi bowls, to vegan mac and rib grilled cheeses (which I happily got to taste test).

Another great thing about the Vegan Street Fair was the energy. Strangers were standing in circles dancing, people were wearing hilariously punny vegan shirts, and pretty much everyone was happy and smiling. It was great to be surrounded by that kind of energy! 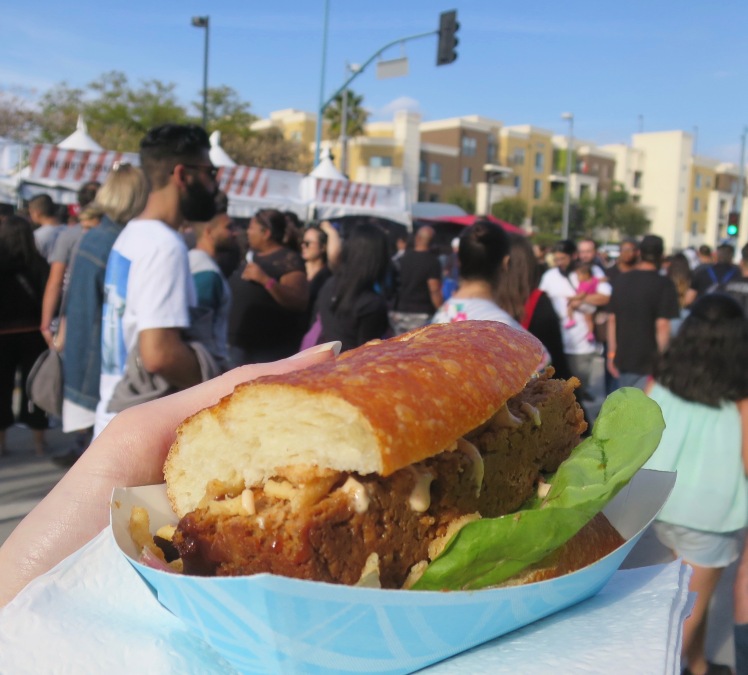 The first food item we tried was the Chicken Meatloaf Sandwich from The Abbott’s Butcher. The bread was a nice, hearty french bread and the chicken “meatloaf” was incredibly tasty! We scarfed that little sandwich down in less than 2 minutes. Off to a good start!

Next, we tried the Cheesy Mac and “Rib” Melt from The Grilled Cheese Truck. When I saw this on the menu I KNEW I had to try it, but I wasn’t alone in that thought because it definitely had the longest line. Once I finally acquired the coveted vegan grilled cheese filled with macaroni and jackfruit ribs, it all made sense. It was decadent and delicious!

The final dish we tried was Saag Aloo from The India Jones Chow Truck. This spinach and potato curry dish was just spicy enough and the perfect, filling dish to end the day off with!

Overall, The Vegan Street Fair was filled with positive vibes and delicious food. Check out their site to see if the Fair is coming to a city near you!